The natural world and its weather have long played muse to classical music artists. Countless interpretations of Vivaldi’s Four Seasons concertos are only the tip of the metaphorical iceberg. However, as our world transforms amid the sweeping effects of climate change, this relationship has shifted, with composers and performers alike engaging more with environmental topics in their work. This includes more fervent calls to action.

It has resulted in many composers in recent years ruminating on climate change. Take Brett Dean, whose work Fire Music evokes the heat wave and subsequent brush fire in Australia in 2009. There’s also Lei Liang, who draws ardently from topics of global warming and “human irresponsibility” in his 2020 Grawemeyer Prize-winning Hearing Seascapes, and other works that bring to mind phenomena like rising ocean levels. To score a Polish documentary on climate change, composers Szymon Weiss and Szymon Sutor warped Vivaldi’s Four Seasons into “The Lost Seasons,” to reflect a distorted future that scientists predict we’re headed toward.

Many new works bring awareness to this issue. But, how is classical music taking action?

Performers are also facing the issue head-on. Artists from the pop spheres are getting vocal about new practices for reducing their carbon footprints: Coldplay announced decisions to forego a global tour last November because of environmental concerns; in January, the Dave Matthews Band partnered with the Nature Conservancy to plant one million trees as part of their Summer 2020 tour; Massive Attack commissioned a climate change research center to audit their touring carbon footprint.

Pivoting to the classical music world, practices look different. There are challenges to vowing to go carbon neutral or even reduce environmental impact for most classical performers. With classical music performers and institutions relying heavily on touring, especially international touring — as the COVID-19 pandemic has underscored — it’s not plausible to follow in the way of Coldplay. Global touring also keeps classical music thriving, many argue.

Composer and cornetist Taylor Ho Bynum acknowledges the complexity of this issue when it comes to the environment. “I feel there’s something so powerful about the vibration of live music. That’s why we tour,” he said, noting music-making’s power to cultivate cross-cultural empathy. “But, at the same time, the costs are going to be all the more obvious.” Even if artists adopt sustainable practices in their personal lives, the realities of being a working musician often complicate. 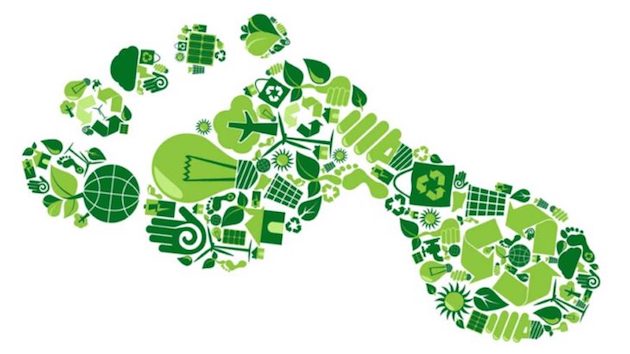 Bynum referred to the staggering environmental costs of international tours: domestic and international flights originating in the United States emit 29 percent of all global greenhouse gas emissions, according to the Environmental Protection Agency. As Vox reported, in a piece looking at a growing movement to discourage air travel, a one-way flight from New York City to London spits out one ton of CO2 per passenger.

For Bynum and colleagues who rely on audiences abroad, especially those in Europe who are enthusiastic about experimental jazz, it’s something to grapple with. “There are few musicians, I feel, who don’t carry a little bit of guilt for it, or are aware of the detriments of it,” Bynum said.

In 2014, Bynum embarked on a unique project: his Acoustic Bicycle Tour. It was a five-week, 2,000-mile journey where Bynum biked down the West Coast, from Canada to Mexico, performing concerts along the way. The philosophical performance art piece Bynum created was in itself an act of composition. Yet illustrating the environmental and carbon cost of touring was another central tenet.

“I’d be the first to admit, there’s all kind of hypocrisies with it,” Bynum said, explaining that he flew out to begin the bike ride. There was a disconnect “between the core principles and philosophies in the music I was interested in making and the touring realities we live with.”

He muses that those in the industry will have to find creative, innovative solutions to existing models down the road. It may require changing models. Bynum offered one powerful solution: reducing carbon emissions might fuel local arts scenes.

Initiatives to counterbalance emissions are a start

Some artists focus on offsetting their footprint through creative initiatives.

Composer, experimental jazz multi-instrumentalist, and dancer Jen Shyu’s “something good” is set up to link concert ticket sales to planting trees. She uses a company called WEARTH. For her solo show Zero Grasses, commissioned by John Zorn and premiered at National Sawdust in New York City, each ticket sold saw a tree planted in a forest dedicated to Shyu’s late father. The project expanded to nearly every subsequent Zero Grasses performance.

Shyu, who describes herself as adopting sustainability throughout her personal life, first got the idea while staying in a Marriott Hotel branch. In partnership with WEARTH, the hotel gives guests the option to plant one tree for every day they forego housekeeping. This sparked an idea for Shyu, who said she typically opts out of laundering anyway. It was a fit for Zero Grasses, which was initially built around the concept of climate change, before the passing of her father added more layers of meaning.

Through WEARTH, Shyu purchased a grove of trees, represented virtually online, for ticketholders to claim. At performances, Shyu’s assistants ask audience members to be part of Shyu’s virtual forest, proffering codes for them to input online.

“It’s something different,” Shyu said, explaining that WEARTH plants the trees, and her performances enable Shyu to purchase more and support their initiative. “It’s a beautiful thing. I feel like it’s a way I give back to my audiences.” It’s also an apt expansion — Shyu’s work often draws upon environmental issues. “It’s hard as an artist,” Shyu said. “It’s always our struggle, whether we have political messages or critiques of certain aspects of society, a fine line of not wanting to lecture the audience but wanting to educate through our work.”

Some ensembles have also chosen tree planting as an environmental initiative, such as Finland’s Lahti Symphony Orchestra, which offsets emissions by planting in 3.3 hectares of forest.

What performers and fans can do

There are several practices artists have adopted in being mindful of their carbon footprints. Shyu offers bringing a disposable water bottle on planes and also turning down laundry service for the duration of hotel stays. She also recalls that some artists have banned single-use plastics while on tour.

Mode of transportation is also a central topic. Violinist Patricia Kopatchinskaja travels by train when possible, according to The Guardian. (She also partnered with some members from the Orchester des Wandels to perform works addressing the climate crisis; profits were donated in full to environmental initiatives.)

It’s more difficult for larger orchestras and ensembles to find solutions, especially when it comes to international touring. Some, including those who sign on to this sustainability charter started by musician Zoe Shevlin on change.org, have suggested that festival organizations coordinate to share ensembles, reducing the number of times large groups must travel. As the Lahti Symphony Orchestra found, it also makes a difference how people travel to their concerts, and they encourage audience members to carpool or take public transportation to concerts. This op-ed encourages fans to push concert halls to become LEED certified, support green initiatives, and even have electronic, not printed, tickets.

Sweeping industry-wide changes are still needed. In the meantime, the classical world has its eye on sustainability more than ever before.

The virtuoso violinist brings her relentless curiosity and unbridled passion for new music to the pioneering festival.