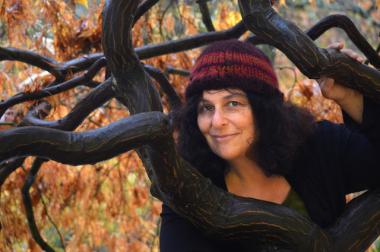 While orchestra, opera, and ballet cancellations are grabbing the headlines, musicians of all stripes are feeling the pain of sheltering in place, not just from the interruption of income, but also from the absence of the fellowship and camaraderie that comes with rehearsing, performing, and simply making music with others for the fun of it. Yes, concert halls are quarantined, but so are pub sessions, community choirs, and even back porch jams. And while some musicians are filling the gap with elaborate online performances, one Bay Area musician is spearheading a simpler, grassroots approach.

Multi-instrumentalist Shira Kammen is well known to Bay Area music enthusiasts for her work with medieval and Renaissance groups such as Ensemble Alcatraz, Project Ars Nova, Medieval Strings, Hesperion XX, the Boston Camerata, and many others.

She also plays Balkan and other traditional music with the eclectic Janam, English country-dance and contradance music with Roguery and The Whoots, codirects WAVE women’s choir, directs the mixed-voice Gallimaufry, and plays medieval harp in hospital and care settings in conjunction with Healing Muses. As if that weren’t enough, she is music director for the annual California Revels.

Like most professional musicians, when her upcoming gigs in California, Hawaii, Washington State, and Nashville suddenly evaporated, she suddenly found herself with a lot of time on her hands. It wasn’t long, though, before the notion of “Noony Tunes” emerged. Kammen says, “It was March 17, the first full day of our shelter-in-place, and I just thought ‘Oh, it is St Patrick’s Day, I should play an Irish tune,’ and thought [the Irish jig] “Banish Misfortune” would be good, so casually put sheet music for it on Facebook.”

She added to her post, “In honor of St. P’s Day, I will play ‘Banish Misfortune’ on the fiddle at noon Pacific Standard Time. Anyone who wants to join me please do, and let me know what instrument you are playing on. Love to you all.” Scads of players joined in from the privacy of their own shelters and a daily ritual was established.

Each afternoon since, Shira has shared an image file of sheet music for the next day’s tune and posts a roster of who played what in the virtual orchestra the day before. Participants range from well-known professionals to absolute novices. All manner of instruments are represented, but some folks just hum the tune. As per Kammen’s Facebook page, “singing, spoons, cat treat bags, dancing, all means as desired!” She says the most unusual instrument reported is “‘diaper-butt percussion’ from a friend in Germany who has a new baby.”

Tune selections very from simple to more challenging. “Some are easier than others, but since we don’t play together in real time, everyone can take tempos that work for them, or transpose as fits their instrument or voice,” says Kammen. Some of the music is chosen because the titles suggest a topical theme.

Kammen explains: “It started out with St Patrick’s Day, then I started looking for appropriate tune titles that seemed apt, so day two was ‘Jack’s Health,’ an English country dance tune (with an alternate title of ‘Bolt the Door,’ which was only mildly amusing), then it was the first day of spring, so there were spring pieces [‘Spring Song’ and ‘First Day of Spring’]. Someone asked for a song so we did ‘Scarborough Fair.’

“Other tune titles have been ‘The Pleasures of Hope,’ ‘Candles in the Dark,’ ‘Exile of Erin’ (for Ireland’s current lockdown), ‘Gigue du Salon,’ and a few more. Don’t really know if it will continue thematically or not. I do have an April Fools’ Day piece chosen.”

Interested participants can find the music on Facebook. “I’ve been posting them on my Facebook page, and making sure it is marked “Public.” The California Revels also posts them on their FB page, and many of the players share them as well,” says Kammen.

Kammen is not bothering with trying to set up a real-time, high-tech connection for her project. “There is a Zoom component that some of the California Revels people have organized,” she says. “Some meet on that platform, but the bulk are playing at home, just knowing that others are playing then too. Or they are fashionably late, or early — since that bit doesn’t really matter!

"Personally, I’ve been playing without Zoom for now, just having it be a sweet feeling of being connected. I do ask folks to report in and say what they played on (or sang, or danced, or whatever) so there is a sense of ongoing community.”

And the community is widespread. “There are some folks I don’t know, but of the ones I do, lots of folk musicians and early musicians and some classical musicians,” Kammen says.

“A few days ago, I asked everyone for their locations — people were all over the U.S., some in Canada, and there were reports from England, Scotland, Norway, Germany, India, Australia. Since I’m posting sheet music, most of the musicians are readers. But there are easy-to-find YouTube and other examples of most of the tunes, so a by-ear musician could figure them out (or might know them already).”

Kammen plans to keep the session going for the duration of the shelter-in-place order. After that, it’s a bit of an open question:

Isn’t it hard to imagine what things will be like then?

If health and survival prevail, I’d hope to reclaim some of the things most important to me — making music with friends in person, getting back to my slow hacking away at the Pacific Crest Trail, hopefully being able to do some of the work that has been cancelled or postponed, since there were so many projects near and dear. And hopefully having a better sense of time and gratitude that can be brought outside the house.

Oh yes, and a whole bunch of new tunes learned!”

Tres Hermanicas and Aquila are set to play a concert of music that bridges a traditional religious divide.