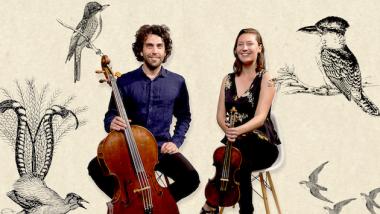 “Where Song Began” Is for the Birds

In his book, Where Song Began: Australia’s Birds And How They Changed The World (Yale University Press), Australian ornithologist Tim Low argues that ancient Australia was the evolutionary cauldron that provided the world with a remarkably rich array of bird groups, including parrots and songbirds, “the birds that can sing.” A concert program performed by violinist Simone Slattery and cellist Anthony Albrecht translates that premise into a musical celebration of Australia’s avian diversity.

The duet is giving two Bay Area benefit presentations in support of those birds and their habits imperiled by the recent bushfire crises. They appear at the Noe Valley Ministry in San Francisco on Feb. 8 at 7 p.m. and at the Orinda Library Auditorium on Feb. 9 at 6 p.m. All profits from those performances will be donated to help restore bird habitat and threatened species via Birdlife Australia.

The musical performance will be enhanced by film projections and “an immersive soundscape.” According to program notes, “audiences are encouraged to contemplate the origin of birdsong and the importance of Australia's rich and colorful bird history.”

Slattery is a 2018 Churchill Fellow who was recently awarded a doctorate in music performance from the University of Adelaide. She performs regularly with Australia’s finest ensembles. Albrecht is an Australian graduate of The Juilliard School’s historical performance program.

Music For Australia: A Concert Raising Funds for the Bushfire Crisis

Music For Australia: A Concert Raising Funds for the Bushfire Crisis

The premiere of seven new pieces were just the latest of nearly 50 small-ensemble works that comprise the composer’s magnum opus.