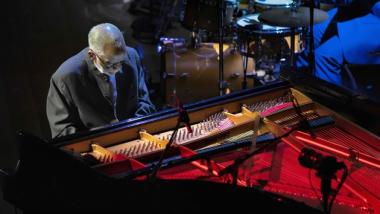 Without the benefit of a few decades of hindsight, it’s hard to say whether or not jazz is in the midst of a golden age. But there’s no doubt that the contemporary scene is experiencing an unprecedented creative wave flowing from musicians in their golden years. Drummers may be outliers when it comes to longevity, but simply considering active masters over the age of 80 makes for an astounding list, starting with Roy Haynes (94), Jimmy Cobb (90), Jackie Williams (86), Tootie Heath (84), Roy McCurdy (82), and Louis Hayes (82).

But no musician embodies jazz’s fountain-of-youth effect more vividly than pianist Ahmad Jamal, who is playing with undiminished fire and imagination at 89. Since Sonny Rollins and Wayne Shorter have hung up their horns, he’s arguably jazz’s most influential living master, a visionary whose approach to space and dynamics, repertoire, harmony, and rhythm expanded the music’s possibilities in the mid-1950s.

Jamal kicked off the SFJAZZ Center’s 2019-20 season on Thursday, opening a four-night run with bassist James Cammack, New Orleans drummer Herlin Riley, and Puerto Rican percussionist Manolo Badrena. I was on hand to present him with the Jazz Journalists Association 2019 Lifetime Achievement Award, a distinction preceded by at least half a dozen other career-capping honors, including being named an NEA Jazz Master in 1994.

Jamal seems to sincerely appreciate the recognition, but he’s far more interested in where he’s going than in where he’s been. He’s a bandleader par excellence, and his present ensemble is a ferociously locked-in unit. Though they’ve all cycled in and out of his orbit over the years, these players first worked with Jamal in this configuration about a quarter century ago.

They’ve played hundreds of gigs together, and experiencing the ensemble Saturday it was evident that “play” is the operative work. Jamal conducts and arranges in real time, turning to signal Riley or Badrena to add a metallic texture on a chime or a talking drum whomp. On “Bogota,” a tune by composer/arranger Richard Evans that Jamal introduced on his orchestral 1962 South American travelogue album Macanudo (Argo), brought to the fore the Latin tinge that has animated his music for six decades.

He was in a soulful mood, adding a steady flow of quotations from spirituals like “Soul of a Man” and “Wade In the Water.” A blazing rendition of “Blue Moon” displayed the group’s exquisite use of dynamics as they rendered each phrase with telegraphic precision, a string of pearls stretching out into space.

His arrangement of “Poinciana,” a bona fide hit for his trio in 1958, is still a marvel. The sanguine groove that defines the piece, one of the great pleasure points in American music, brought a Caribbean feel to the center of Jamal’s sound, and it’s no coincidence that he’s always favored drummers from New Orleans (like Herlin Riley). The set reached a sublime climax with a sprinting “Like Someone In Love” so buoyant that the band seemed to defy gravity.

Just about every pianist and bandleader playing in SFJAZZ’s packed 2019-20 season owes a debt to Jamal, whose influence is so pervasive it’s almost impossible to measure. Experiencing the source directly is a joyful education.

The combo, featuring alumni from Blakey’s pioneering band, offers a fitting season finale for the Jazz at Lesher series.