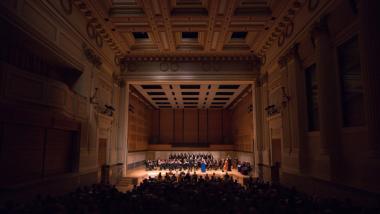 American Bach Soloists closed out their “Glory of Dresden” summer festival with some lesser known baroque works supporting J.S. Bach’s also rather rare cantata “Der Friede sei mit dir” (“Peace be with you”), at the S.F. Conservatory of Music. The concert presented a study in demographic extremes. On one hand, cohorts of conservatory students poured in at the last moment, dutifully noting meticulous details of obscure bits of Pachelbel and Biber. An elderly man proudly sporting an “I like IKE” campaign hat serves as a representative example of the other primary audience sector.

Musically, however, the evening of “Baroque Masters,” which served as a send-off for longtime bass-baritone Max van Egmond, presented few contrasts. Egmond perhaps sought a farewell concert swathed in major key insouciance, and “Der Friede sei mit dir” likely attracted as a rare Bach cantata featuring only solo bass.But athough the musicians — especially Egmond himself — performed with focus and ease throughout the evening, the monotone selection of easygoing, jovial pieces tended to sedate the charms of any one of them.

Many of the Bach cantatas, featuring stark Lutheran texts ranging from repentent to self-flagellatory, grind and dig at your heart for half an hour. In line with the mood yesterday, however, Egmond sang the fragmentary, quite early, and atypically sunny “Der Friede sei mit dir.” It’s a piece that certainly offered more harmonic contour and emotional expanse than the largely anemic Biber and Pachelbel selections, yet one that still left the listener salivating for an extended dissonance or a menacing, chromatic bass.

Without doubt, ABS will sorely miss Egmond’s spacious and studied tone, which at times almost boomed despite the hushed volume of the affair. Egmond also managed perfect mastery of that essential mix of speech-like articulation, recalling the concerned Lutheran shepherd addressing the flock, with operatic, sugary treatment of the longer melodic lines. Egmond, though given a scant few minutes of solo singing time, simply could not have improved had he tried: it’s easy to overlook the difficulty for a master in restraining a solo to the necessary dynamic level to work with whispering baroque instruments, as the cantata requires. But Egmond shaped even his high entrances into such soft and evenly articulated parameters that often you forgot the presence of a solo voice as differentiated from the instruments — exactly the right way to perform the work.

With such high quality performers — Katherine Kyme stood out on violin as well — even this relatively colorless supporting program offered occasional highlights, if you listened closely. Sometimes the players exaggerated the delicacy and ethereality of the music to such a degree as to reach uncertainty, or even self-parodic comedy. More than once the audience joined the soloists in laughter as a sputtering psuedo-false start flitted away or an instrument clumsily (intentionally) imitated a line more suited to its original bearer.

The deep cut nature of the selections allowed some room for other sorts of surprises, too: Telemann’s Sonata in E-flat major for Oboe and Harpsichord, for example, though for the most part bland as a beginner’s etude, did open with a strikingly modern lullaby of a largo, which oboist Debra Nagy captivatingly stretched and massaged to the absolute slowest, sparest possible point it could reach before breaking. Moments like these demonstrated what top talent can do with even meager material.