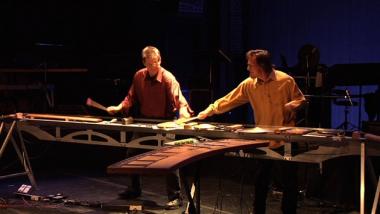 Some composers of contemporary music see themselves as part of a tradition, recipients of the legacy of classical music. Their works may feature novel sounds and provocative concepts, but they nevertheless utilize standard Western notation and traditional ensembles.

Dresher and Schmidt’s Hurdy Grande is constructed like a traditional hurdy-gurdy, with a wooden wheel that “bows” the strings. On the traditional instrument, one hand cranks the wheel while the other plays keys that vary the strings’ pitch. The Hurdy Grande operates with an electrically powered wheel and features a much larger scale length. Additionally, the instrument is amplified.

Don Buchla’s Marimba Lumina resembles the acoustic marimba but uses electronic mallets and bars to trigger sounds. As one of its co-creators, Joel Davel has an impressive command of the instrument.

Featured on three of the program’s four pieces, the Marimba Lumina provided kaleidoscopic variety. In Dresher’s Glimpsed from Afar, Davel used the instrument to process acoustic sounds with digital effects, trigger a massive library of sampled drums, and play a synthesizer.

Glimpsed from Afar also featured another Dresher/Schmidt creation, the Quadrachord. At nearly 14 feet long, its strings are tuned to phenomenally low pitches. One feature of this huge scale, as Dresher points out, is the wide spacing of its harmonic nodes.

On a violin’s strings, the higher pitches of the harmonic series are separated by millimeters or less, rendering them difficult to play with accuracy. The Quadrachord’s harmonics are spread out like piano keys, and Dresher put them to fascinating use. Beautiful harmonic chords rang from the instrument, oddly tuned but enchantingly resonant.

Part composition and part comedy sketch, Joe Davel’s Out of Thin Air uses the Buchla Lightning, a wireless electronic instrument consisting of two wands which transmit infrared light to a sensor. By varying the wands’ position and acceleration, the performer can control electronic or sampled sounds.

Out of Thin Air is a theatrical journey in which the performer attempts to master an instrument with ever-changing parameters. Curiosity leads to enjoyment and then frustration as the instrument’s sounds metamorphose, control slipping from the performer’s fingers as quickly as it arrived.

Davel’s inventiveness was endless. At times the wands became mallets, beating the skin of a virtual drum. One wand transformed into a giant plectrum, brushing against the strings of an imaginary guitar. Davel later became a conductor, the wand his baton, starting and stopping samples of a disco track with a flick of the wrist.

The slapstick routine of feigning surprise and frustration at the Lightning’s responses grew tiresome toward the end of the piece, but overall the comedy was effective. Davel’s program notes mention that the piece contains music intended for choreographer Allyson Greene; indeed, an alternate version of Out of Thin Air would be captivating in the hands of a virtuoso dancer.

Dresher’s Three for Two, with video by Naomie Kremer, had its world premiere at the Saturday evening performance. Davel took advantage of the Hurdy Grande’s amplification by placing strings of beads on the instrument’s body as Dresher played. The beads’ amplified vibrations were mirrored in Kremer’s video, which featured heavily-processed photographs and footage of the invented instruments.

The sound was mixed well throughout the concert, with both electronic and amplified acoustic elements clear and balanced; however, the volume was sometimes overwhelming, especially the lowest frequencies in the subwoofers. Occasionally I found it necessary to plug my ears to avoid pain.

Most impressive was the duo’s tight control over time and structure. It would have been easy enough for Dresher and Davel to rely on the spectacle of their invented instruments and present a two-hour jam session. Instead, they presented four rigorous and well-rehearsed pieces, the improvisational elements carefully controlled to add spontaneity.

Feel The Pressure at the Other Minds Festival

Kronos Quartet continues to do important work, and their commissioning projects leave an unmatched legacy.