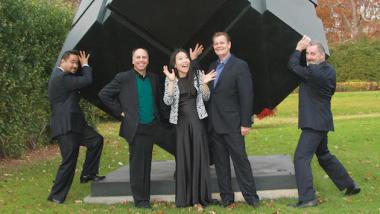 The musicians’ renditions of the Mozart Piano Quartet K. 493 and the Brahms Piano Quintet Op. 34 were, as expected, exquisite. But the story of the concert turned on the new, less familiar work from Adams, which had its premiere last February.

In his thoughtful introductory remarks to the audience, Adams explained that Quintet with Pillars, co-commissioned by the Mondavi Center, was inspired by a question from his friend and mentor, Michael Tilson Thomas: “What happens when a piece of music is over? What sticks? What can you take with you as a listener?”

Adams tries to answer this question with a novel formal structure through which the music deconstructs and examines itself. The five-movement form consists of two “Parts,” representing the seed of the piece, interlocking with three “Pillars,” which frame and reflect upon the central material.

The opening gesture, a crystalline flourish from the piano followed by soft sustained resonance from the strings, gives a synopsis of what is to follow. Indeed, the entire piece seems to be about resonance itself, about the details of sound and noise that hide underneath and between the notes and rhythms on the printed page.

The piano provides attack to the strings’ sustain, a role magnified by Blu Tack putty placed on selected strings. The putty dampens much of the pitch while leaving the hammers’ percussive noise intact. An iPad placed on the music stand runs software that amplifies and extends selected frequencies from the piano, providing a ghostly trail in the wake of a loud gesture. Between the putty and the electronic elements, Adams creates a kind of hyperpiano, both more percussive and more resonant than usual.

If Brahms asks the stringed instruments to sing, Adams invites them to breathe and hum. The score abounds with harmonics, long sustains, and intervals carefully chosen for their resonant interaction. In the cavernous acoustics of Jackson Hall, ashy subtleties of bows against strings coalesced into a sonic mist. Throughout the work, Yang and the Alexander Quartet gracefully navigated the score’s many intricacies of timbre and rhythm, careful to separate their sounds or glue them together as necessary.

Quintet’s five movements run together without pause, but stylistic and gestural transitions between movements are clear. The two “Parts” are more direct, present, and active; the “Pillars” more contemplative, suspended in time. Throughout the piece, small gestures repeat, disappear, and reappear. The impression is of a fragment of a memory, or a puzzle with pieces that almost, but never completely, fit together.

This structural scheme is remarkably effective in creating the illusion of metamusic that flips itself inside-out and provides its own commentary. I was reminded of the rear panels of van Eyck’s Ghent Altarpiece, in which the prophet Micah, literally resting his hand on the frame of a panel, emerges from a lunette to look down at a depiction of the Annunciation below him. In both works, the art examines itself.

If this large and impressive piece has a fault, it’s the notes and rhythms themselves. Adams’s language feels icy and detached, focusing intently on sound but losing some music in the process.

Adams says in the program that his piece “strives to communicate meaning through its form just as the chamber music of Mozart and Brahms does.” Wizards of structure though they were, Mozart and Brahms also communicated through the immediate surface of their music, manipulating the sonic fabric of a musical language they shared with their audience and which was inseparable from their culture. Late-18th-century Viennese wore powdered wigs, ate strudel and liver dumplings, and preceded perfect authentic cadences with a long trill.

Communication happens through shared idioms. Contemporary concert hall audiences are (thankfully) not nearly as culturally homogenous as Mozart’s audience, but there are nevertheless musical ideas that we all recognize.

I think it’s possible, without being sentimental, to offer listeners a nugget of familiarity, an unmistakable sign or token that produces some involuntary reaction within us, that can be hinted at, deconstructed, forgotten, and rediscovered. A familiar idiom would amplify the emotional impact of Adams’s virtuoso structural procedure.

Quintet with Pillars is a work of striking scope and technical power. It’s clear that Sam Adams has a sensitive, delicate ear and a limitless sonic imagination. Joyce Yang and the Alexander String Quartet were focused and committed, bringing this large and difficult work to life with both accuracy and warmth.

It was the lesser-known of three piano quintets that shone in an inspired performance.