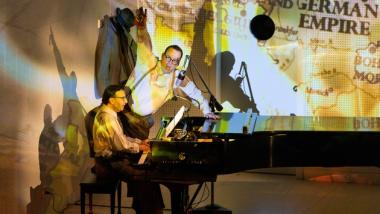 Singers often bring a song cycle to life with extremely subtle means: gesture, facial expression, timbre. This weekend, a team of artists used all the means of a 21st-century stage play to enliven composer Hanns Eisler’s Hollywood Songbook at Bing Concert Hall. In addition to performers Russell Braun (baritone) and Serouj Kradjian (pianist), the artistic team included a director; set, costumes, lighting, and projection designers; production and stage managers; and projection and technical directors. Whatever you may feel about Eisler’s music, the performance is worth seeing for its novel realization of song.

The lighting projection, acting, and music-making for the event, titled “Hell’s Fury” (a translation of the German höller Wut, homophone for the word “Hollywood”), unfolded in a boxlike stage (floor, three walls, and ceiling), painted white with four rows of florescent lighting glaring from the ceiling. Arranged as a recording studio, the audience saw a piano, microphone, stool, chair, coat hooks, doors to the outside and an inner control booth, a window between the recording space and that booth, and a folding door acting as a projection screen. As the audience filtered in, a dashboard-sized Nazi flag, aloft on the small pool, sat on the piano, striking in the bright whiteness of the room.

Braun and Kradjian entered, wearing identical suits, overcoats, and hats, together acting as the composer Hanns Eisler. They drank, smoked, made penciled notes on scores, and Braun spoke between some songs. Videos and translated lyrics projected onto the stage, at times covering only single objects like the folding door, at other times using all the interior surfaces of the stage. As the music and actor-musicians walked us through Eisler’s tumultuous adult life, the stage was transfigured to assist in multimedia storytelling. When Eisler told of leaving Germany, we heard Adolf Hitler on his radio; images of palm trees and a pool undulated as he sang about his this time in L.A.; videos from his movies served as intertextual backdrops for songs; clips of his testimony before the House Un-American Activities Committee led up to his forced migration from the United States, and we found ourselves in a low-lit bar in Berlin with Eisler as he comes to terms with critiques of his recent opera.

Within this tale, some songs also provided intimate narratives, as in a song where Eisler’s child inquired about the value of learning and elicited from Eisler a lament on the unmet basic needs of many in the midst of war. Here, and throughout, Braun and Kradjian were musically in sync with each other, never calling attention to their musicmaking and always focused on the story. Eisler’s music can be acerbic and uncomfortable at times (he was, after all, a student of Arnold Schonberg and Anton Webern). But even those who don’t usually go for this kind of modernism would likely find the story and storytelling enough to make up for the auditory unpleasantries.

One of the most moving moments came accompanied with Eisler’s music for the East German national anthem. Kradjian played the beautiful, hymn-like harmonization at a whispery, lullaby dynamic level. Braun quietly intoned the lyrics of the anthem and as the projected East German flag grew larger, filling the entire stage space, a recording of a mass choir faded in and took over from Braun/Eisler. Rising in volume as the march-like section of the anthem climaxed, the projected translations cut out, focusing the sensational swell, giving me chills.

A sucker for such hope-filled sentiment, it conjured, for me, links with a host of East German films that featured characters learning to value community and striving to care for one another. With our historical distance, such political dreams have an added air of melancholy, since we are aware of the tragedies perpetuated alongside these utopian goals.

At one point, Braun pinned up a poster of Stalin, showing children looking admiringly up at the leader. “This is freedom,” it read. The intersection of the audience’s historical knowledge and the poster foreshadowed yet another struggle for Eisler. Immediately after the anthem, we hear Braun/Eisler discussing political criticism of an opera he had worked on and ensuing censorship. It’s 1956, a projected text tells us (the year of the 20th Congress of the Communist Party of the Soviet Union when Khrushchev’s “Secret Speech” decried the cult of Stalin) and Eisler’s song invokes Passover events, taking measures to stay safe in coming danger, while Eisler/Braun removes the Stalin poster. In the final song, Braun gathered up the flags of the three nation states that had wronged him: Nazi Germany, the United States, and East Germany. He slammed the piano lid shut at the end of the song, lay down on the floor, and left us, he said while looking out into the audience, “to reflect on the reason for his silence.”

There were moments when the staging felt trite, when the acting was unconvincing, and when Eisler’s music fell flat. Even so, the use of so many artistic means to perform this song cycle was inspiring and the performance crafted striking moments that made me see some historical and political events anew. I think Eisler would be happy with such a takeaway.

West Edge Opera’s Threepenny Opera Is on the Edge

Well-sung renditions of Kurt Weill’s songs are highlights of this production.

The father-and-son duo explores the roots and branches of minimalism.

Although the composer’s music is touted as avant-garde, the lovely sounds offered at Bing were anything but.