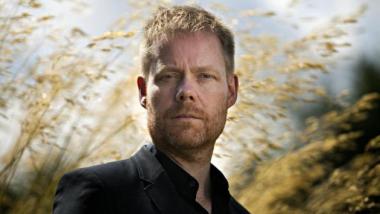 The language wrapped around the concert was harder to understand: Richter is called “a staple of the avant-garde” and the music is “radically unafraid of appealing directly to our emotions” (emphasis added). The two pieces on the program, Infra and music from the show The Leftovers, showed no signs of the avant-garde. Originally written for ballet, Infra was a memoriam for the 7/7 bombings in London, a nine-part piece with sections alternating between piano and ACME, all amplified and both accompanied by prerecorded sound. Minimalist and post-minimalist techniques loomed large with an extensive use of looping in the parts for live performers and in the backing track. Richter also drew on the perennial climax device of creating denser texture by gradually introducing new layers of rhythmic division. Nice touches included occasional melodic bits from Schubert’s Winterreise, the structural use of a pitched train signal, and distortion and reverb effects for the live instruments.

By the end, however, the piece felt worn, longer than necessary, and increasingly predictable. Perhaps it felt different for audience members who came with an existing connection to these pieces. Richter, in his black turtleneck, swayed slowly back and forth on his piano bench to ACME’s soothing harmonic whirl, and many in the audience seemed right there with them to the end. The Leftovers on the second half, divided into approximately 17 sections, had a similar effect, only this time with louder amplification and occasional vocalizing from Grace Davidson. Clearly, Richter has synthesized multiple techniques very successfully. I got chills a few times and was usually swept up in the beauty of the music, but avant-garde it was not. One could argue that there is novelty in the subtle and effective use of digitally produced timbres, but otherwise the music is not leading any charges. So why cast this music as avant-garde? How is it radical for a composer to “appeal ... to emotions” in 2019? This is not the 1950s. Milton Babbitt is not looking over our shoulders. In any case, hyping Richter as an experimentalist deceives few and is likely irrelevant to most.

After three rounds of standing ovations, Richter and ACME performed On the Nature of Daylight as an encore. In a spoken introduction, he told the audience that he wrote the piece as a protest against the Iraq War in 2003. He went on, connecting the piece with Stanford Live’s theme this season: culture and politics. Infra was also introduced as an example of this theme and it got me wondering about the function of these pieces. What sort of affective labor or emotional work do these compositions do for an audience in Northern California, far away from the London bombings and the still-growing death toll in Iraq? When Richter announced the title of the encore, groans of pleasure arose from the audience. It makes sense: The piece is beautiful, it is Samuel Barber’s Adagio for Strings pushed into the 21st century. But the piece’s effect seemed less like political protest and more like resignation, an oddly pleasing opportunity to shed a tear, a brief connection with our seemingly distant war, aestheticized and offering the feeling of having done something, of having just gone through something. Beautiful, yes. Uncomfortably so.