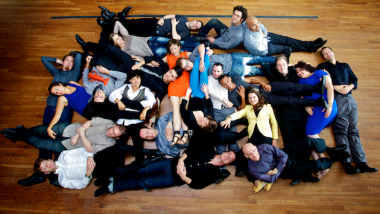 Beyond jaw-dropping musicianship of the highest caliber, you never know what you’re going to get from the International Contemporary Ensemble — their freewheeling artistic curiosity and deeply collaborative ethos make each of their concerts a unique affair. On Saturday, August 3, they presented an exuberantly varied program built around displays of solo virtuosity at Merkin Concert Hall as part of the Mostly Mozart Festival.

In Anahita Abbasi’s Sketch II (2012) for kamancheh (a Persian string instrument) and electronics, the soloist was the only one on stage. Niloufar Shiri covered the acoustic part, teasing out ghostly stutters and slides against abstract electronics filled with distant rumblings and chitinous clicks. The dense textures briefly resolved into an ephemeral melody, but, like a sketch, it soon evaporated back into silence.

The fragmentary nature of Kurtág’s work paired well with Kate Soper’s The Ultimate Poem Is Abstract (2016). Featuring Soper herself and a small chamber orchestra (conducted, like the other large works, with easygoing precision by Vimbayi Kaziboni), The Ultimate Poem is Abstract features snippets of text from a wide array of writers — Susan Sontag, Jacques Derrida, and Yukio Mishima, to name only three — before an extended treatment of the daunting Wallace Stevens poem that gave Soper’s piece its name. While the work unfolds in one long arc, its mood is mercurial, shifting from spare textures to lush, almost Romantic outpourings and back at the turn of a phrase. At several points, Soper’s vocal lines emerged from or disappeared into the oboe or the trumpet, and the whole ensemble came to feel like an extension of her voice, singer and ensemble fused into one instrument of infinite timbres.

Nathan Davis’s Inside Voice (2018, New York premiere) started with a similar effect, as wind players blew air through their instruments in a layered tapestry of sighs. Inside Voice mimics the sound of a half-built organ with no pipes attached, and much of the work is taken up by hissing breaths, to the point that the first real pitches felt like mistakes. The work built through a raucous polyphonic slalom to a full-voiced final growl — the organ was fully assembled.

Instrumental mimicry was also at play in Ann Cleare’s teeth of light, tongue of waves (2017–18), a double concerto of sorts for bassoon (Rebekah Heller), voice (Alice Teyssier), and a small string ensemble including bowed guitar. Cleare wrote the soloists to be highly synchronized, to the point that Heller sometimes stopped playing her bassoon to spit out a consonant or two and yelp in unison with Teyssier (who spent much of the piece singing into a cardboard tube). This synchronization grew stale to my ear by the end of the piece; I wanted more of a dialogue between the solo voices.

Fortunately, there was dialogue aplenty in the world premiere that ended the program, Dai Fujikura’s Shamisen Concerto. (The shamisen is a Japanese string instrument played with a large plectrum.) Hidejiro Honjoh tackled the solo part, breathing the piece to life with delicate tremolos before launching into a blistering moto perpetuo. The backing ensemble soon caught up, batting at the solo part with off-kilter chords and splintering into delicate washes of sustained tones. The slower central section saw the soloist picking out august, stentorian lines against frigid, groaning chords in the ensemble before the soloist began to goad things back in a livelier direction. An expansive cadenza ushered in a final whirlwind dance that built to a series of panicked alarms, and the evening ended on a final uproarious tutti honk.

The latest iteration of the multicultural collaboration explores the idea of the heroic gesture.