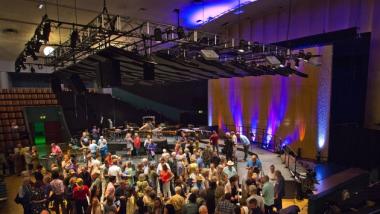 The space for the final concert of this year’s Cabrillo Festival was unassuming: the first level of the stage was only one sheet of black tape away from the floor of the Santa Cruz Civic Auditorium. A few risers rose modestly behind that, basketball tape markings still visible around the borders of this set-up. Folding chairs acted as the main seating in front of the orchestral space with old, wooden seats layered like bleachers against the walls. Dark sheets draped the unused seats beyond the stage. The musicians themselves sported business casual clothing, adding to the sense of informality.

The four pieces on the program shared elements of post-minimalist musical vocabulary and orchestration techniques: the whirling of Glass-inspired arpeggios, Adams-ian use of ethereal string harmonics (think of the end of Shaker Loops: I. Shaking and Trembling), and drones layered like building blocks to create and recede from climaxes. But it was Mazzoli and Muhly who brought these elements into dialogue with their own techniques and sensibilities in convincing and moving ways.

Muhly’s Impossible Things, from 2010, is a set of six texts by the Greek-Egyptian poet C. P. Cavafy. divided into three parts with orchestral forces inspired by Benjamin Britten’s Illuminations (strings, solo violin, solo tenor). The texts Muhly chose from Cavafy are beautiful, evocative things in themselves, and Muhly did something incredible with them. The composer didn’t so much set them to music (i.e. make music accompany the text), but rather presented the words as linguistic distillations of his musical events, putting the instruments and voice on more equal footing, occasionally even using the voice as background or accompaniment to the instruments’ finely crafted musical contrasts.

Take the opening of Part 1 as an example: strings unfold layer upon layer of descending lines, the solo violin enters with sprigs of melody or even just passionately performed single notes. Muhly offers this dense and emotional texture for some time before the tenor enters with Cavafy’s prose, which Muhly sets, without any textual repetition, to an often confined range of pitches: melodious but never overly operatic. Or take Part 2, which contains some of the longest vocal lines as well as moments of delightfully heart-breaking, wonderfully just-so placements of a single syllable on fragile string writing.

When tenor Nicholas Phan introduced the piece, he noted that after its initial run of performances around 2010, the piece fell out of performance until Muhly Facebook-messaged to share the piece with him. It was Phan who advocated that Măcelaru include the piece in the Cabrillo festival this year, and, with Phan’s recent recording of the Britten piece that inspired Muhly’s orchestration, I hope we get a recording of Muhly’s work soon.

Mazzoli’s Sinfonia (for Orbiting Spheres) stood out in the program as a masterpiece from start to finish. It is built of repeating motives that loop with one another and reemerge over the course of the piece. Mazzoli, in her third residency at the festival, noted the influence of the hurdy-gurdy on the piece, which she evokes with a blend of melodica and harmonicas. With Mazzoli’s profound ability to create lush textures using her characteristic stacks of unusually juxtaposed triads, these unexpected timbres induced a distancing effect, which, together with a quasi-filmic use of widely spaced drones, made me feel like I was afloat on the music’s orbits. At just under 10 minutes, Mazzoli’s piece must be the most concise composition on the theme of the solar system, and it begs for multiple listenings, especially after experiencing Mazzoli’s awe-inspiring fade out in the final moments of the piece.

I have said so little about the performers and conductor partly because they gifted us such tight performances that the music itself is what stood out the most: no distracting theatrical displays of virtuosity, no attention-grabbing accidents. Rather, impeccable playing led by an awesomely effective conductor. Since we have another 340-odd days until the next Cabrillo Festival, it will be worth tuning in to KALW’s rebroadcast of this and other festival concerts.

Anna Clyne’s Abstractions stands out in a concert of contrasts and short takes.