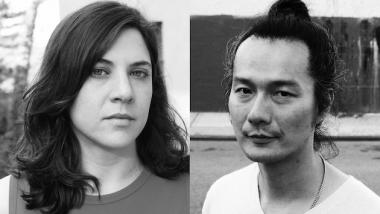 Only in New York City would a piece for brass and electronics feel meditative. The piece in question was Cecilia Lopez’s Dos (tres), presented on Monday night (March 19) in the first concert of her residency at the multimedia performance venue Roulette. Dos (tres) preceded Bifurcations, a collaboration with composer and lighting system designer Aki Onda.

Roulette doesn’t have fixed seats, allowing it to be endlessly reconfigured for the needs of different artists; in this case, the chairs were arranged in a horseshoe around the outskirts of the auditorium, leaving the center open for the players. To start the evening, Forbes Graham and Joe Moffett, the two trumpeters, walked into the center of the room, faced each other across a line of microphones and music stands, and began playing a long-held tone. For the next several minutes, nothing else happened.

When two notes are almost, but not quite, the same pitch, the sound waves interfere with one another, causing pulses of brief silences that quicken as the notes diverge. As Graham and Moffett stood with the bells of their trumpets almost touching, they began, with teasing slowness, to drift out of perfect alignment, sending ripples of these phantasmal quivers scurrying out into the air. The frequency of these flickering silences is precisely determined by acoustic math; with nothing else to hear but this not-quite unison, it felt like we were listening in to the sounds of Physics itself. When the trumpets fell silent, revealing a pure electronic tone, it had the shock of an elegant solution popping out of a thorny snarl of multi-variate differential equations.

The entire piece unfolded along similar lines. Even when the trombone entered at the far rear of the auditorium, the resulting chords lingered instead of progressing, exploring the resonance of note against note against note instead of driving forward to the next sonority. The work came to ground with the trombone and overdriven electronics outlining a comforting major third in an unhurried oscillation, as heavy and gentle as a settling bank of fog.

Gentleness was in shorter supply with Bifurcations. An entirely electronic work, it made much use of tiny speakers woven into a massive net of speaker wire, created by Lopez, that hung from the ceiling like the shed skin of a giant snake. Lopez and Onda each had their own home base of densely wired control panels, but both also roamed about, carrying portable contraptions and setting various dangling lightbulbs and wire sculptures swinging.

Many of the work’s varied sounds were induced by the hum of electricity in badly shielded wires, amplified into deliberate squeals of controlled feedback. I confess to not being entirely sure how some of them were generated — Lopez, in particular, seemed able to tease out squalls of digital whalesong from tangles of speaker and cable connected to nothing at all — but the results ranged from a joyous birdsong cacophony to a mystical halo of static hums.

As Onda moved around, he periodically turned various lights on and off, gradually moving the space from near-total darkness to radiant warmth. Unfortunately, I had to cover my eyes for the climax of these manipulations, when Onda, with no warning, aimed a strobe flashlight at a space blanket — I’m sure it looked cool, but I’m more than a little shocked that a potential migraine and epileptic seizure trigger would be deployed without so much as a sign on the door.

The program describes Bifurcations as the first collaboration between these two artists, and it definitely felt like two strong voices fitfully finding their way toward dialogue. Bifurcations lacked the seamless, organic logic of Dos (tres), but it had moments of playful anarchy that resulted in more surprise. Both were carefully tailored to Roulette’s space in a deeply physical way — this music may be electronic, but it can only fully be experienced live.

From new student pieces to a Gérard Grisey masterpiece, it was an afternoon of possibilities.

Fresh works highlight the latest installment of the flutist’s quest to build a new repertory for her instrument.