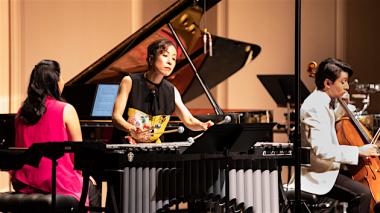 [email protected] celebrates its 17th season this year. The chamber music festival and institute offers concerts with top-tier performers and talented students as well as public master classes, lectures, and more informal conversations with performers. This Saturday’s concert at the Center for Performing Arts at Menlo-Atherton focused on works from the 1990s, and was the last of a seven-part series covering select decades from the past 300 years of Western classical music.

While the performers and their artistry were one continuously thrilling aspect of the concert, another, less captivating aspect was the choice of repertoire. I applaud the idea of selecting pieces from a single decade, and am grateful for the deep dive into repertoire we do not hear frequently, but with one exception the pieces do not seem to have aged well. At times they even felt old-fashioned and there is certainly music from the ’90s that does not have this quality. I got the sense, however, that most of the audience is here, rightly, to hear the performers. Penderecki’s quirky, serious-sounding, neoromantic String Trio, for example, got more people on their feet for applause than any other piece in the concert save the final salvos. This applause, it seemed to me, was for the incredible performance by Sussmann, Neubauer, and Finckel and less about a previously undiscovered hotbed of Penderecki fans in the Bay Area.

The compositional highlight and my favorite performance of the evening was Bright Sheng’s Concertino for Clarinet and String Quartet. The piece opens with a solo clarinet melody with ever-louder interjections from the string players. Clarinetist Romie de Guise-Langlois lovingly wove the piece’s unexpected grace notes and shocking pitch bends. We were in for a big sound world. Guise-Langlois’s control of even the most wonderfully wailing parts for her instrument filled the hall, and while some groaned at the shrieking pitch heights Sheng calls for, I found them stunning and fascinating: something truly unusual, interesting, and gripping. At times it was as if Sheng thoughtfully and elegantly deployed his own development of Bartók’s modernist language, drawing on different inspiration: folk music from northwest China.

The second movement began with a running ostinato for clarinet that blossomed into masterfully-performed extreme register shifts, all supported by the beautifully played, ethereal sounds from the string players (Soovin Kim and Chad Hoopes on violin, Richard O’Neill on viola, Keith Robinson on cello). Guise-Langlois’s virtuosic skills were on full display but always in service of her declarative, captivating storytelling style. The final movement keeps up the surprises of stunning register overlaps between cello and clarinet, Guise-Langlois’s incredible sustained tones featuring magically incremental overtones, and an amazing conclusion of soft, low sounds with the most breathtaking burst of energy.

Even if the repertoire is not all to your liking, [email protected] is worth investigating. Know that the performers will be extraordinary, and feel good about supporting a program that strives to fund their students and that is broadcast across the country and around the world by American Public Media. The organization is also in the midst of constructing a much-needed new concert space (the Spieker Center for the Performing Arts at the Menlo School) that will offer a more intimate concert experience, bringing us even closer to these once-in-a-lifetime performances.