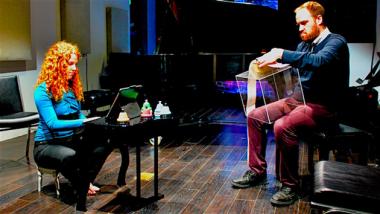 As composer Danny Clay pointed out while introducing his pieces on the program, Bard Music West seeks out active composers to present their works. but also engages them to determine the rest of the program. Clay selected Phyllis Chen’s Carousel for toy piano and music box, a timbral revelation, with the soft resonance of the music box (performed by Clay) balancing the brittle duration of the toy piano (with Allegra Chapman at the helm). Stephen Montague’s Mirabella: a Tarantella for Toy Piano showed off Chapman and the toy piano’s virtuosic abilities, setting the stage for Clay’s Toy Piano Music, a fast-paced, post-minimalist, toccata (think of combining the energy of Henryk Gorecki’s Piano Concerto with Glassian harmonies, all condensed into less than three minutes).

Still more compelling was Clay’s Playbook, a set of music-making games that Clay adapts for each performing ensemble. The iteration for Bard Music West included sections with voluntary audience co-performance. We were equipped with envelopes containing clickers made of metal and plastic as well as wooden-toothed combs when we entered the performance space, which was a wood and glass room with seating for about 40. Trained in our role by Clay before the piece began, the audience was unaware of the performers’ (string quartet and toy piano) rules, and the performers, in turn, were unaware of our specific instructions. This made the experience as much about discerning the rules as noticing and enjoying the sounds.

The third section of Playbook (“Look Up”) has audience members using their clickers whenever a performer blinks; meanwhile, the musicians are playing long tones if they make eye contact with a randomly selected audience member. The result was hilariously uncomfortable eye contact, with wide-eyed performers roaming the space and beautiful swarms of clicks and sustained tones. Playbook closed with “Campfire,” a looping toy-piano line, string drones, (Arvo) Pärtian handbell tones, and the warming crackle of the audience’s wooden combs, strummed one nodule at a time. Live, participatory ASMR realness.

Composer Gabriella Smith chose Haydn’s String Quartet Opus 20, No. 6 as her opening act, setting the stage for her string quartet Carrot Revolution. Smith described how she was inspired by juxtaposing clusters of similar but unique shapes, sounds, patterns, textures, and sizes (a cue taken from the eccentric curatorial style of the Barnes Foundation in Philadelphia) and a quotation stemming from Émile Zola’s character Claude Lantier in L’Œuvre: “The day was not far off when one solitary, original carrot might be pregnant with revolution!” Smith deployed an awe-inspiring range of techniques, all while crafting an immense and cohesive experience: the harmonic language of the indie Classical scene, deft use of string instruments’ percussive capabilities, rhythmic and gritty noise in thick frequency bands, rich drones, grooving baselines, and breathtakingly lush tuning shifts.

Blown away by Carrot Revolution, I was dumbstruck by Anthozoa, Smith’s 2018 piece based on underwater sounds she encountered in the coral reefs of French Polynesia. Riffing on the crackling static of shrimp, communicative fish grunting, and the sounds of animals dining, as well as the feeling of being out on the water, the work is for piano, percussion, violin, and cello. The pianist is mostly busy plucking and patting strings inside the piano, the cello, glissing, while soft, mid-frequency screeches come from the violin.

All the performers were on-point throughout the evening, and percussionist Mika Nakamura deserves special mention: she was unstoppable as she performed with a collection of bowls, sticks, pots, and graters, driving the continuous rhythm of the piece with aplomb. The piece came to an end with sentiment-filled chords from the piano and the longest post-composition audience-silence I have ever experienced. Stunning and moving. I am enthralled with the piece, eager to sit down with the score and understand it in more detail, and I wish I could point you to a recording of the piece. If you’re not already keeping tabs on Gabriella Smith’s output, you’re missing out. Big time.

The small music festival promises to make a big impression in 2019.

From new student pieces to a Gérard Grisey masterpiece, it was an afternoon of possibilities.