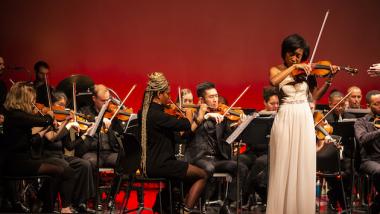 As classical musicians begin the long-overdue work of diversifying their repertoire, many are looking to composers living and working today. But there are just as many past composers who, despite being famous in their time, have been written out of mainstream history. The Harry T. Burleigh Society turned their attention to such composers on Wednesday evening, presenting music by Florence Price and William Grant Still along with a selection of spiritual arrangements at the Schomburg Center for Research in Black Culture in Harlem, N.Y..

Then again, as musicologist A. Kori Hill noted in her preconcert remarks, calling them arrangements may be underselling them. William Levi Dawson’s take on “Ezekiel Saw de Wheel” (1942) — performed with great vigor by The Concert Chorale and Courtney’s Stars of Tomorrow conducted by Courtney Carey — features a burbling coda of motoric fragments that anticipates 1970s minimalism. Harry T. Burleigh’s take on “My Lord, What a Mornin’” (1918) is less adventurous, but the singers teased out the work’s deft inner voices with great clarity.

Burleigh was a titanic figure in U.S. music history, working as a singer, composer, mentor, publisher, and editor. He helped preserve and popularize spirituals, and was a student at the National Conservatory of Music during Antoín Dvořák’s three-year stint as the Conservatory’s director. Burleigh is the one who introduced Dvořák to the genre of the spiritual, which led, famously, to Dvořák imitating the form in the slow movement of his Ninth Symphony (1893), which was given a perfunctory performance before the intermission by the Urban Playground Chamber Orchestra under the baton of Thomas Cunningham. (To make the link transparent, Lawrence Craig sang “Deep River” from the back of the hall in his rich, moody baritone immediately before the Dvořák.)

The orchestra’s string section produced a rich and seamless sound, and Lillian Copeland gave the English horn solo the phrasing of a spontaneous folk song, but the woodwinds had issues of balance and blend throughout the movement, and Cunningham’s pushy tempo in the outer sections weakened the contrast with the flurry of activity that comes toward the movement’s climax.

Such issues were absent in the second half of the program, which opened with the NYC premiere of Florence Price’s Second Violin Concerto (1952). It’s a flamboyant work in the best sense, full of brash outbursts, decadent luxuriations, aching chorales, and virtuosic pyrotechnics. Kelly Hall-Tompkins covered the solo part with unflappable poise, bringing a luscious radiance to her lower register. The orchestra swooned and incandesced with theatrical fervor.

Price’s concerto melds features of the spiritual tradition with classical orchestral writing to produce a rambunctious escapade; William Grant Still fused the same elements to opposite ends in And They Lynched Him on a Tree (1940). A setting of a poem by Katherine Garrison Chapin for two choruses (the Brooklyn Ecumenical Choir for the black mourners and the Ad Hoc Chorus for the white lynch mob), contralto soloist (Lucia Bradford), narrator (Lawrence Craig), and orchestra, the piece is a taut, restless description of a lynching. There are moments of repose, as in the mournful ballade for the contralto, but in general the energy leans propulsively forward.

There were moments where the Brooklyn Ecumenical Choir lost the precision of their rhythmic edge, but the baleful concluding oracle — “A sun will rise in a bloody sky . . . A long, dark shadow will fall across your land!” — landed with earth-shattering force.

Still completed the work in the midst of an unsuccessful push for federal antilynching legislation. To this day, there is no federal antilynching law. The ghoulish spectacle of white people sending postcards depicting the mutilated corpses of black people may no longer be in vogue, but the extrajudicial killing of black people continues unabated, frequently at the hands of militarized police forces who sometimes work in tandem with open white supremacists. The shadow of racist terrorism is long indeed; we are still living in its vile heart.